← Limitless Riches
The Infiniteness of God → 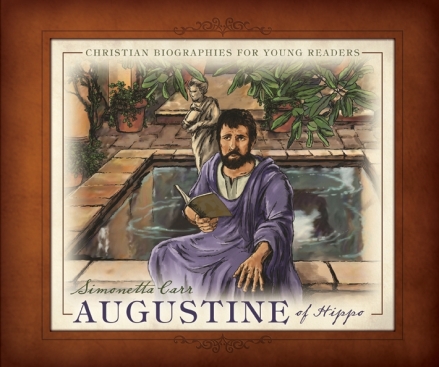 Pre-order Augustine of Hippo for 40% OFF Today ONLY!

Outside of the people in the Bible, Augustine of Hippo is the most influential person in church history. Yet how many people know his story? In this book, Simonetta Carr introduces young readers to the life and ministry of Augustine. Readers will come to know Augustine’s personal struggles and the high value he came to place on the Bible and truth. Readers will also see the difficult days in which Augustine lived, learning about his disputes with false teachers and the turbulent times during the fall of the Roman Empire. This volume is vividly illustrated, simply written, and full of interesting facts. It is written for young readers, but is sure to capture the interests of the whole family.

Authors
SIMONETTA CARR was born in Italy and has lived and worked in different cultures. A former elementary school teacher, she has home-schooled her eight children for many years. She has written for newspapers and magazines around the world and has translated the works of several Christian authors into Italian. Presently, she lives in San Diego with her husband Thomas and family. She is a member and Sunday School teacher at Christ United Reformed Church.

WESLEY (WES) LOWE has over 25 years experience as an illustrator, and has illustrated for advertising agencies and publishers in the US, Canada, and Europe. He lives with his wife in British Columbia, and works from his studio on the Sunshine Coast, which is a short ferry ride from Vancouver.

Blurbs
“A splendid way to introduce children-and adults too-to one of the most influential Christians who ever lived.”
-PHILLIP S. CARY, Scholar in Residence at the Templeton Honors College at Eastern University, and author of several books on Augustine

“Few figures in Western history are as important as Augustine. He is one of the early church fathers to whom the Reformers rightly looked as an inspiration for their theology and piety in many respects but he is more than that. He is an old and dear friend. Simonetta Carr has produced a clear, readable introduction to the life and work of this great Christian and our old friend.”
-R. SCOTT CLARK, Professor of Church History and Historical Theology at Westminster Seminary California

“Simonetta Carr offers a sympathetic, whirlwind tour of the life, times, and beliefs of Augustine of Hippo, one of the most important and long-loved figures for Western Christianity. Maps, illustrations, timelines, and photos engage the imagination at a pace that will hold the interest of young readers.”
-BRANDON AND MINDY WITHROW, authors of the popular church history series for children, History Lives