Heirs with Christ: The Puritans on Adoption 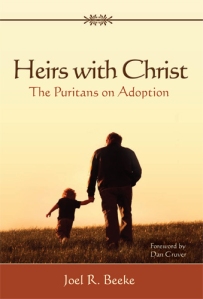 Foreword to Heirs with Christ:

God is an adoptive Father. Jesus, our Elder Brother, is God the Father’s eternal, only-begotten, natural Son. We believers are His children through adoption. This identity is central to who we are. As adopted children, we enjoy all the rights and privileges of the relationship that God the Father enjoys with His eternal Son. This is an amazing reality and eternal privilege.

If adoption is first heavenly before it is earthly, why do we Christians so often think of earthly adoption before we think of heavenly adoption? Why do we think horizontally before we think vertically? I think one reason for this is the neglect of the doctrine of adoption in the history of the church. In his massive, 2,600-page work The Creeds of Christendom, the church historian Philip Schaff only includes six creeds that contain a section on adoption because they are the only ones he could find while scouring almost 1,900 years of church history.

The early church was primarily concerned, and rightly so, with the doctrines of the Trinity and of Christ because those doctrines were being attacked within the church. The Reformation and post-Reformation church necessarily focused on defending the doctrine of justification. These battles were all essential for the church to fight in the defense of Christian truth, but unintentionally they resulted in the church’s failure thoroughly to develop Scripture’s teaching on adoption.

Even though adoption has been relatively neglected in the history of the church, the Puritans have not contributed to that neglect. To my knowledge, no tradition in the history of the church has rejoiced in and proclaimed the truth of adoption as have the Puritans. Though the Puritans, as  f late, have received bad press in their treatment of this great doctrine, their writings demonstrate that they esteemed nothing higher than the incomparable privilege of being God’s children through adoption.

Dr. Joel Beeke offers a great service to the contemporary church by examining the Puritans’ substantial and worship-filled treatment of the believer’s adoption by God. Beeke does a masterful job of setting the record straight on behalf of the Puritans. He has extensively studied the Puritans and is uniquely qualified to write on this most important subject.

The church today should richly benefit from this exposure to Puritan teaching on the biblical doctrine of adoption. If we as Christians even begin to approach the Puritans’ love of heavenly adoption, we will be spiritually richer for it. Therefore, I highly recommend Dr. Beeke’s book Heirs with Christ: The Puritans on Adoption.

By: Dan Cruver, Co-Founder of Together for Adoption.

Happy 94th birthday to our patriarch, our great grandfather, our grandpa, our father, a husband, brother, friend and World War II vet, Richard Marion Dewalt.
Willow Harlan enjoyed the pretty day we had today while mom and dad worked on the garden.
My new favorite picture.
Wyatt Cash & Willow Harlan
Happy St. Patrick’s Day from Wyatt & Willow.
Spring break with Willow has been good.
So I did not clean my pellet feed after last weeks smoke and BAM this is what I got tonight. Yes, it is my fault. Yes, I was able to save my chicken before this took place. #pitbossnation #pitboss #pitwhoops #needscleaned #pelletgrill #mybad
Brutus has always been kind to Willow since day 1.
#chicken #biggreenegg #dinner
Big brother and sissy. #siblings
Tell me baby why you been gone so long. Don't call me an outlaw, no. I guess it's 'cause the truth, it’s the hardest thing I ever faced. You should have seen it in color. #countrymusic #davidallancoe #johnnypaycheck #shooterjennings #jameyjohnson
Merry Christmas from the Dewalt family. “But when the fullness of time had come, God sent forth his Son, born of woman, born under the law.”
On vacation and missing our kiddos already.
Brother sure loves his “sissy” (he calls her). He adores her and ask to hold her and spend time with her every night. I am thankful to have a son as kind as Wyatt.
I had a wonderful breakfast with my family this morning on our first snow day of the year. I was trying to decide what picture to post, but why not all of them? #WillowHarlan #SnowDay