My Favorite Books Published on Calvin in 2009

#5 The Calvin Handbook, by Herman J. Selderhuis, published by Eerdmans. Research on French theologian John Calvin is flourishing around the world today, and Calvin’s quincentennial this year has lent such research even greater momentum. The Calvin Handbook is designed to support and stimulate this research. An international team of renowned scholars here offers a comprehensive view of Calvin’s biography, his theology, and the history of his reception. The Calvin Handbook is a uniquely helpful resource on Calvin for readers of every interest level.

#4 Friends of Calvin, by Machiel A. van den Berg, Reinder Bruinsma (translator), published by Eerdmans. In two dozen short biographies of John Calvin’s friends — including some who turned into enemies — Machiel A. van den Berg paints an intimate portrait of the great Reformer’s life and circle that most of us have never seen. In these pages we accompany Calvin from his early boyhood in Noyon to his student days in Paris and Orleans, to his pastorate in and exile from Geneva, all the way to his deathbed. We meet his famous Reformer friends, such as Martin Bucer, William Farel, Heinrich Bullinger, Theodore Beza, and John Knox, but also friends whose names are more obscure: his cousin Pierre Robert Olivétan, the first translator of the Bible into French; René de France of French royalty; Laurent de Normandie, the mayor of Noyon who later escaped to Geneva; Pierre Viret, his “best friend of all”; and Idelette van Buren, his beloved wife during their brief but “blissful” marriage. 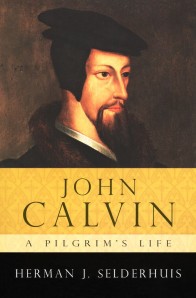 #3 John Calvin: A Pilgrim’s Life, by Herman J. Selderhuis, published by InterVarsity Press. Selderhuis draws on Calvin’s own publications and commentary on the biblical figures with whom he strongly identified to describe his theology in the context of his personal development. Throughout we see a person who found himself alone at many of the decisive moments of his life–a fact that echoed through Calvin’s subsequent sermons and commentaries. Selderhuis’s unique and compelling look at John Calvin, with all of his merits and foibles, ultimately discloses a man who could not find himself at home in the world in which he lived.

#2 Calvin, by Bruce Gordon, Published by Yale Press. During the glory days of the French Renaissance, young John Calvin (1509-64) experienced a profound conversion to the faith of the Reformation. For the rest of his days he lived out the implications of that transformation-as exile, inspired reformer and ultimately the dominant figure of the Protestant Reformation. Calvin’s vision of the Christian religion has inspired many volumes of analysis, but this engaging biography examines a remarkable life. Bruce Gordon presents Calvin as a human being, a man at once brilliant, arrogant, charismatic, unforgiving, generous and shrewd. 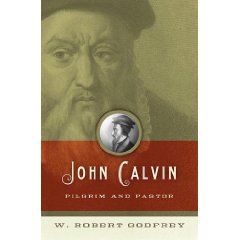 #1 John Calvin: Pilgrim and Pastor, by W. Robert Godfrey, published by Crossway. An introduction to the essential life and thought of one of history’s most influential theologians, who considered himself first and foremost a pilgrim and a pastor.

July 10, 2009, marks the five-hundredth anniversary of the birth of John Calvin. As controversial as he was influential, his critics have named a judgmental and joyless attitude after him, while his admirers celebrate him as the principal theologian of Reformed Christianity. Yet his impact is unmistakable-a primary developer of western civilization whose life and work have deeply affected five centuries’ worth of pastors, scholars, and individuals. What will surprise the readers of this book, however, is that Calvin did not live primarily to influence future generations. Rather, he considered himself first and foremost a spiritual pilgrim and a minister of the Word in the church of his day. It was from that “essential” Calvin that all his influence flowed. Here is an introduction to Calvin’s life and thought and essence: a man who moved people not through the power of personality but through passion for the Word, a man who sought to serve the gospel in the most humble of roles.

Honorable Mention: Institutes of the Christian Religion: The First English Version of the 1541 French Edition, by John Calvin, Elsie Anne McKee (translator), and anything in the “Calvin500 Series” (8 Volume set) by P&R Publishing.