← Liberation and Creation
Christ, Israel, and the Church →

Review of Faithfulness Under Fire: The story of Guido de Bres 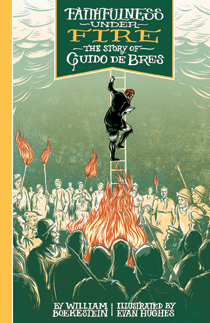 Post/Review written by Geoff Henderson: Be Thou My Vision

I received an email the other day offering me the opportunity to review the book Faithfulness Under Fire: The story of Guido de Bres. Of course I jumped on it, and am glad I did.

Faithfulness Under Fire does a remarkable job of telling a short, but robust story, of the short, but robust story of a man named Guido de Bres. Pronounced “Gee-doe de Bray,” this remarkable man lived in Belgium in the early to middle 1500’s. Influenced by the Reformation truths of justification by faith alone, and the protestant discovery that you could read the bible for yourself, he soon became a marked man. On several occasions he fled to different countries like England and Switzerland to study and learn God’s Word under Calvin and Company. Eventually he married and returned to Belgium. He began pastoring and preaching in secret, though those longing for the spiritual milk of the Word began to number in the thousands. You can’t be too discreet with those numbers!

Dodging the Holy Roman Emperor King Phillip II could last only so long. Eventually he was imprisoned and hung for his faith. Yet during his short life time of 44 years, he penned what became known as the Belgic Confession of Faith, still used by many Reformed churches today.

The illustrations in this short children’s book really make Guido’s story come alive today. My spirit truly stirred within me. I personally hadn’t ever heard of this man before, but upon reading this story, I now have a greater appreciation for the story behind the Belgic Confession. I’m quite guilty of looking at such confessions as though they appeared out of nowhere. Familiar with the story and creation of the Westminster Confession (part of our denomination’s constitution), I know little of the blood, sweat, tears, and martyrdom which often accompany many such articulations of faith. Such documents are more than documents: they are doctrine not just penned by authors but sealed and spread by the very blood of those who believed in such doctrine. Nowadays such formulations and articulations of doctrine cost us very little. But that was not always the case. Faithfulness Under Fire moves us to a simple, but greater appreciation of such confessions.