“A Habitual Sight of Him”: The Piety of Thomas Goodwin – Joel R. Beeke and Mark Jones

Thomas Goodwin (1600–1680) was a faithful pastor, Westminster divine, advisor to Oliver Cromwell, and president of Magdalen College, Oxford. In this book, Joel R. Beeke and Mark Jones acquaint the reader with Goodwin through an informative biographical introduction. The remainder of the book, 35 selections from the writings of Goodwin, displays Goodwin’s constant attention to Christ in his various theological convictions. You will learn much about the life and teaching of this influential Puritan, and perhaps, be strengthened with a habitual sight of Christ. 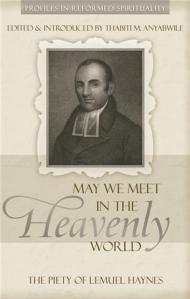 Reformation Heritage Books just got in Thabiti Anyabwile’s newest title, May We Meet in the Heavenly World: The Piety of Lemuel Haynes. If you are looking for a small summer read, Thabiti’s (volume 7) of RHB’s Profiles in Reformed Spirituality Series may be what you are looking for.

“He has just published a great addition to Joel Beeke and Michael Haykin’s fine series Profiles in Reformed Spirituality.  These are handy little paperbacks at a great price.  But don’t let the size fool you.  They’re packed.

Thabiti’s installment is May We Meet in the Heavenly World: The Piety of Lemuel Haynes, fresh off the press at RHB.  As a church history professor, I am greatly in Thabiti’s debt for this book.  Move over dead white men, it’s time for some color.  As a Christian trying to figure out what it means to be a faithful disciple, I am also indebted to Thabiti and to Lemuel Haynes for this book.

Haynes, who also pops up in Thabiti’s The Faithful Preacher:  Recapturing the Vision of Three Pioneering African-American Pastors, was a colonial New England slave, turned Revolutionary war soldier, turned pastor and theologian.  He has been a forgotten voice.  But that is changing.  Make sure to add this to your own summer reading list.  It’s in the warehouse today and ready to go.”

“This well chosen selection from Lemuel Haynes’s writings represents a significant part of the earliest African-American engagements with the Reformed theological tradition. In that tradition Haynes and his black contemporaries, both American and British, found a language of justice and inspiration that allowed them to criticize slavery and racial prejudice, and to offer a Christian vision of a free society. “May We Meet in the Heavenly World” can be recommended to students of Christian theology and of American history.”

Anthony Carter, author of On Being Black and Reformed  said,

“I rejoice to know that God has given me friends and heroes like Lemuel Haynes and Thabiti Anyabwile. I love them both. I have learned much from them. In reading this volume, I am sure you will too. Enjoy.”

You Can Pre-order Thabiti Anyabwile’s New Book at RHB for 50% OFF Today Only!

May We Meet in the Heavenly World: The Piety of Lemuel Haynes

In “May We Meet in the Heavenly World”, Thabiti M. Anyabwile introduces us to the New England preacher, Lemuel Haynes (1753–1833). Through both the biographical essay and the selections from Haynes’s writings, readers are sure to perceive an Edwardsian sense of spirituality that ever lived in view of eternity. Well acquainted with difficulties, suffering, and death, Haynes’s ministry was infused with the unfailing hope of heaven.

Commendations
“This well chosen selection from Lemuel Haynes’s writings represents a significant part of the earliest African-American engagements with the Reformed theological tradition. In that tradition Haynes and his black contemporaries, both American and British, found a language of justice and inspiration that allowed them to criticize slavery and racial prejudice, and to offer a Christian vision of a free society. “May We Meet in the Heavenly World” can be recommended to students of Christian theology and of American history.”

Thabiti M. Anyabwile is senior pastor of First Baptist Church, Grand Cayman in the Cayman Islands.  He has a strong professional and academic background in community psychology, with special interest in the history and development of the African American church. He is the author of The Faithful Preacher, What is a Healthy Church Member?, and The Decline of African American Theology. Pastor Anyabwile and his wife, Kristie, have three children.

For other books in the Profiles in Reformed Spirituality series, click herehttp://www.heritagebooks.org/bookstore/catalog/index.php?cPath=222_448

Devoted To the Service of the Temple

This weeks Book of the Week is, Michael Haykin, and Steve Weaver: Devoted To the Service of the Temple: Piety, Persecution, and Ministry in the Writings of Hercules Collins, (Grand Rapids: Reformation Heritage Books 2007).
Summary of the Piety, Persecution, and Ministry in the writings of Hercules Collins:
When seeing the name Hercules Collins, not many postmodern individuals even know who the man is. Collins lived during the later 1700s and early 1800s as one of the most profound Calvinistic Baptists in London, England. Being one of the greatest Baptist figures of all time, this short biography shows a life of piety that the believer today could only wish to experience personally. In this biography, Dr. Haykin and Steve Weaver outline the beginning of Collins’ life in England, his pastorate, his imprisonment, his popularity among the London Baptists, his piety in knowing God, and his persecution while building the Baptist faith in London. Although many have never heard of him and do not know anything about him, it was his gospel-centered ministry that helped redeem London from the cesspool of sin in his time. Despite the drunkards, the prideful, the profane, homosexuals, and adulterers, Collins’ dedication to the gospel was to preach the good news to all types of people. Collins truly knew how to preach, and one of the characteristics of his preaching was how he prepared for his sermons. In preparing and giving sermons, he aimed to be plain and simple so that even the unregenerate could easily see sound words that soon became light and fire to their hearts. If you are looking for an easy biography to read, there is nothing like that of Hercules Collins’.
Summary selected writings of Hercules Collins:
Dr. Haykin has closely selected 35 different sections from Collins’ writings to show the magnitude of his “plain Jane” writing that was so profound. These writings reveal the relationship he had with his Father, the Lord Jesus Christ.  Some of these sections include writings from when he was in prison, and deal with topics such as how to submit to God’s will. Many people in the 21st Century often look at one of the most prolific speakers of our day, John Piper, because of how he speaks, writes and preaches. If there were a Reformed Baptist that was as insightful to the Scriptures, as vigorous in the pulpit, and as striking with their words as John Piper, it would have to be Collins in the early 18th Century. Writings like: God is the Gospel, The Christ-Finding Soul, Grace Sweetens the Music, and An Old Gospel are just some of the topics of which you can read when picking up Devoted to the Service of the Temple. Not only were his writings profound, but he was also known to be a pastor like no other. Included are articles on being a pastor, such as: The Art of Preaching, The Value of Pastoral Ministry, Interpreting Scripture, Plain Preaching, Sermon Preparation, Preaching the Whole Counsel of God, Advice about Preaching, The Use of Notes in Preaching, and The Believers Ultimate Comfort.
Recommendation: 9 out of 10
Having no clue who Hercules Collins was when I began this book, I was surprised that by the time I had read 125 pages I found out just how gospel-centered he was. These inspiring writings that Dr. Haykin and Steve Weaver compiled are tremendously valuable, and truly Christ-saturated. Although half of them seemed to be more geared towards pastoring, there was still a great amount of theological emphasis placed upon Collins’ writings. Whether about preaching or about the gospel, Collins’ focus was always centered on both the unregenerate and regenerate, to see the promises of God and to live a life of piety for Him.

Beautiful day, good evening
Happy Easter from the Dewalt family! Christ is risen.
Surprised Wyatt & Willow and visited the Omaha Zoo yesterday. Wyatts favorite was the sharks in the aquarium, and Willow’s favorite was the “meow” “kitty” aka the snow leopard.
Merry Christmas Eve from the Dewalt’s.
He adores her. She always wants to be near him. I love them. #kids
O Willow
Happy Reformation Day! Luther chose to do this on October 31st as he knew the church would be full on the next day for All Saints' Day.
I’m ready. Just throw the ball already! #labordorretriever #chocolatelab #chocolatelabrador #lab #retrieving #retriever
Italian buffalo mozzarella and arugula, fresh cherry tomatoes from the garden with a pomodoro sauce on a sourdough crust. #grilledpizza #pizza #pitbossnation #Saturdays
Hey Willow, do you really like beans? Her face says no, but she eats beans non stop.
16 months old and this little girl likes her books. Asking mommy and I every day to read to her. Now only if this last 30 more years I can get use to this daughter thing.
There were a lot of things I enjoyed during my Ohio vacation. But one of my favorites was visiting my dad when nursing homes opened for in person visitations.
“Two are better than one, because they have a good return for their labor: If either of them falls down, one can help the other up.” Happy birthday to my better 3/4ths. I and the kiddos appreciate and love you very much.
Beans or not, you are still pretty to me Miss Willow.
Happy 94th birthday to our patriarch, our great grandfather, our grandpa, our father, a husband, brother, friend and World War II vet, Richard Marion Dewalt.