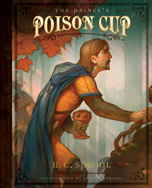 The Princes Poison Cup written by R.C. Sproul, and illustrated by Justin Gerard, is a beautiful depiction of some of the most profound stories and concepts in the Bible, mainly that even the most horrible of things can produce the best results! Although it tells of profound truths, these truths are put into a delightful story that is easily understood by young children alike. In book, R.C. Sproul starts out with a small girl who doesn’t understand why her medicine to make her better tastes so bitter! Her loving grandfather begins to tell her of a depiction of who God is, “The King of Light”, and quickly skims through a Garden of Eden account. The people that were made by the King of Light loved Him so much and spent time with him but were tempted by a dark cloaked figure, “the King’s archenemy” to drink of the forbidden fountain. In response the story gloriously unfolds the will of The King of Light, to send his Son, the prince to drink the bitter cup of poison from the fountain that flows the King’s wrath, to save the people whose hearts had turned to stone. The prince had to die from this poison to truly save the hearts of the people, but the prince did not stay dead, but was gloriously brought to life from the King of Light.  He defeated the archenemy of the King and saved the people’s hearts from stone. In return the prince gave the people this offer, “If anyone thirsts, let him come to Me and drink”.

This book contains some spiritual concepts that are deep, deep enough that many adults have a problem grasping at times but this book shows them in a light that I found very true to Bible and easy to understand. Here are just 2 of the many concepts that were brought out in this children’s book:

Man’s Inability:  R.C. Sproul does an amazing job of truly showing kids that it is nothing on their own will or power that can save them from their sin! In the story the people’s hearts have turned to stone and only the prince’s sacrifice was the hope for them to live in love again. It also showed that not all chose to come back to the “King of Light”, and that was the perfect plan of the King.

Christ’s desire to please His Father: In the story Sproul shows the princes emotions on the quest to the Poison Fountain. The prince, like our Lord Jesus, struggled with the hardness of the task put before Him. The poison was going to taste bad, it was going to be painful and yet the prince pressed on. The prince thought of the people and their stony hearts and took in his responsibility, but above all the Sproul shows that the prince’s true desire in completing this task was to please His Father, the King.

At the end of the book there are a series of questions that parents can go through with their child. Even though the story clearly depicts biblical accounts and truths, Sproul lays out questions that lead the child to conclusions about the connection between the fictional story of the Prince’s Poison Cup and the very Word of God.  Some of these questions are:

·       Does God have an archenemy, someone like the man in the black cloak?

·       The prince was treated very badly when he came to the city of man, how did people treat Jesus when he came?

Not only does this book have the answers for these questions, the answers supply exact references from the Scriptures that tell of these truths! All in all the story, the delightful illustrations and the truths that R.C. Sproul weaves this book into will be a great and important addition to any child’s collection of books and even more importantly a very sharp and effective tool that parents can use to show the truths of the Word of God.

Mickey Mouse Clubhouse, popcorn and wrestle bubbie before bed.
Happy 12th Anniversary dear.
#kansascity
The heavens declare the glory of God, and the sky above proclaims his handiwork. - Ps. 19:1
It’s my 4th birthday! Can I have a pupcake, Dad? #chocolatelab #labradorretriever
Vacation #2 this summer for the Dewalts. Gulf Shores with friends & family was great.
The good news is we look nothing a like.
Willow photo shoot
This is what happens when you try to take a serious photo with a childhood friend.
A fav. #oysters
Happy 4th of July folks!
Haircut before family vacation. He is happy and excited to see friends in the gulf shores.
Daddy & Daughter picture.
Welcome to the backside of 30 dear!
Happy happy happy birthday Em.