Was Jesus the Object of Old Testament Faith?

In yesterday’s post, “Was Salvation Through Jesus Christ?” a friend commented asking me…

“Salvation is always through Jesus Christ, but does this have to mean that he was the object of Old Testament faith?”

I would argue yes, the object of the Old Testament Faith was Jesus Christ and this is how I would argue for that.

According to Jesus, Abraham’s object was none other than Jesus himself.  John 8:56 reads, “Your father Abraham rejoiced that he would see my day. He saw it and was glad.”

What was David’s object of faith? In Acts 2:29-31- 29 “Men and brethren, let me speak freely to you of the patriarch David, that he is both dead and buried, and his tomb is with us to this day. Therefore, being a prophet, and knowing that God had sworn with an oath to him that of the fruit of his body, according to the flesh, He would raise up the Christ to sit on his throne, he, foreseeing this, spoke concerning the resurrection of the Christ, that His soul was not left in Hades, nor did His flesh see corruption.”

Who was Job’s Redeemer in Job 19:25? As he says “For I know that my Redeemer lives, and at the last he will stand upon the earth.”

Pauline Theology: Romans 1:1-7 – Paul, a servant of Christ Jesus, called to be an apostle, set apart for the gospel of God, which he promised beforehand through his prophets in the holy Scriptures, concerning his Son, who was descended from David according to the flesh and was declared to be the Son of God in power according to the Spirit of holiness by his resurrection from the dead, Jesus Christ our Lord, through whom we have received grace and apostleship to bring about the obedience of faith for the sake of his name among all the nations, including you who are called to belong to Jesus Christ, To all those in Rome who are loved by God and called to be saints: Grace to you and peace from God our Father and the Lord Jesus Christ.

Romans 4:22-25 – That is why his faith was “counted to him as righteousness.” But the words “it was counted to him” were not written for his sake alone, but for ours also. It will be counted to us who believe in him who raised from the dead Jesus our Lord, who was delivered up for our trespasses and raised for our justification.

Galatians 3:9 – So then, those who are of faith are blessed along with Abraham, the man of faith.

Was Salvation Through Jesus Christ in the Old Testament?

1 Corinthians 10:1 For I want you to know, brothers, that our fathers were all under the cloud, and all passed through the sea, 2 and all were baptized into Moses in the cloud and in the sea, 3 and all ate the same spiritual food, 4 and all drank the same spiritual drink. For they drank from the spiritual Rock that followed them, and the Rock was Christ.

Hebrews 4:1 Therefore, while the promise of entering his rest still stands, let us fear lest any of you should seem to have failed to reach it. 2 For good news came to us just as to them, but the message they heard did not benefit them, because they were not united by faith with those who listened.

1 Peter 1:8 Though you have not seen him, you love him. Though you do not now see him, you believe in him and rejoice with joy that is inexpressible and filled with glory, 9 obtaining the outcome of your faith, the salvation of your souls. 10 Concerning this salvation, the prophets who prophesied about the grace that was to be yours searched and inquired carefully, 11 inquiring what person or time the Spirit of Christ in them was indicating when he predicted the sufferings of Christ and the subsequent glories. 12 It was revealed to them that they were serving not themselves but you, in the things that have now been announced to you through those who preached the good news to you by the Holy Spirit sent from heaven, things into which angels long to look.

Revelation 13:7 Also it was allowed to make war on the saints and to conquer them. And authority was given it over every tribe and people and language and nation, 8 and all who dwell on earth will worship it, everyone whose name has not been written before the foundation of the world in the book of life of the Lamb who was slain. 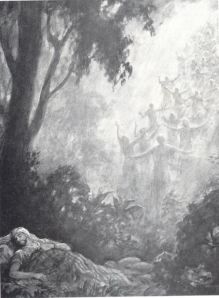 Genesis 28: 10-22 – Jacob left Beersheba and went toward Haran. And he came to a certain place and stayed there that night, because the sun had set. Taking one of the stones of the place, he put it under his head and lay down in that place to sleep. And he dreamed, and behold, there was a ladder set up on the earth, and the top of it reached to heaven. And behold, the angels of God were ascending and descending on it! And behold, the LORD stood above it and said, “I am the LORD, the God of Abraham your father and the God of Isaac. The land on which you lie I will give to you and to your offspring. Your offspring shall be like the dust of the earth, and you shall spread abroad to the west and to the east and to the north and to the south, and in you and your offspring shall all the families of the earth be blessed. Behold, I am with you and will keep you wherever you go, and will bring you back to this land. For I will not leave you until I have done what I have promised you.” Then Jacob awoke from his sleep and said, “Surely the LORD is in this place, and I did not know it.” And he was afraid and said, “How awesome is this place! This is none other than the house of God, and this is the gate of heaven.”

So early in the morning Jacob took the stone that he had put under his head and set it up for a pillar and poured oil on the top of it. He called the name of that place Bethel, but the name of the city was Luz at the first. Then Jacob made a vow, saying, “If God will be with me and will keep me in this way that I go, and will give me bread to eat and clothing to wear, so that I come again to my father’s house in peace, then the LORD shall be my God, and this stone, which I have set up for a pillar, shall be God’s house. And of all that you give me I will give a full tenth to you.”

Christ the ladder: As he rests overnight, Jacob has a dream, which centers on a ladder set up on the earth, and the top of it reached to heaven. The Hebrew term translated “ladder” could possibly denote a stairway similar to those found on ancient ziggurats. What matters most is not the precise shape of this structure but its purpose; it provides a bridge between heaven and earth, revealing that God is still committed to making the earth his dwelling place. Jesus identifies himself as the ladder linking earth and heaven…

John 1:43-51 – The next day Jesus decided to go to Galilee. He found Philip and said to him, “Follow me.” Now Philip was from Bethsaida, the city of Andrew and Peter. Philip found Nathanael and said to him, “We have found him of whom Moses in the Law and also the prophets wrote, Jesus of Nazareth, the son of Joseph.” Nathanael said to him, “Can anything good come out of Nazareth?” Philip said to him, “Come and see.” Jesus saw Nathanael coming toward him and said of him, “Behold, an Israelite indeed, in whom there is no deceit!” Nathanael said to him, “How do you know me?” Jesus answered him, “Before Philip called you, when you were under the fig tree, I saw you.” Nathanael answered him, “Rabbi, you are the Son of God! You are the King of Israel!” Jesus answered him, “Because I said to you, ‘I saw you under the fig tree,’ do you believe? You will see greater things than these.” And he said to him, “Truly, truly, I say to you, you will see heaven opened, and the angels of God ascending and descending on the Son of Man.”

Even more interesting is that while human beings want to ascend to heaven (as reflected in the Tower of Babel story, Genesis 11, God is interested in making the earth his temple-city. Verse 51 is an allusion or quotation of Genesis 28:12, and Jacob’s ladder is replaced in the verse by “the Son of Man.” The title “Son of Man” in John’s Gospel has the basic understanding of His origin in heaven (6:27, 33), that He will return again to His place of glory (6:62) by way of the cross (3:14; 8:28; 12:23, 34; 13:31). The divine origin and authority of Jesus is suggested by the title “Son of Man.” It was the Messianic title that Jesus chose for Himself. Here Christ does not make mention of the ladder and replaces it with Himself, because Christ is the only way to the Father, Christ is the ladder which Jacob looked forward to, and is the ladder which we the Church have today linking us on this earth to our Heavenly Father which art in the heavens.

It is about time. Finally. Keith Whitley has been inducted into the country Hall of Fame.
Wyatt hauled in this 8.22lb channel cat last night by himself. That was fun to watch. Special thanks to @hunterandersons for taking us out on the water.
A good coach can change a game, a great coach can change a life. - John Wooden
Life is better with ice cream.
Happy Mother’s Day dear
We were looking to get pictures of Willow in her cute dress. But this picture has my heart. I love these kids. I am very thankful for them.
Happy happy happy birthday Willow.
Happy Easter from the Dewalts. He is risen.
Chaplaincy Outreach Team, 2022 National #ligcon
PRTS alumni at #ligcon 2022
#ligcon 2022 in Orlando with the fam
#KansasAintThatBad #NoClouds
#vermillionlighthouse #vermillion #lakeerie
It is with our deepest sorrow that we inform you of the death of our beloved patriarch, husband, dad, granddad, great-granddad, WWII veteran, and friend to many, Richard Marion Dewalt (1926) passed away today at 2:50 pm.
Merry Christmas from the Dewalt’s